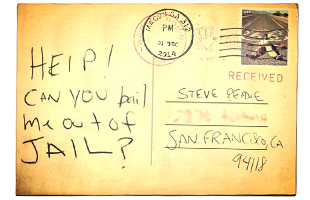 Why was it so cold? What was this nuisance poking my back and tickling my ass?

Bright white, fluorescent lights pried my eyelids open. Foggy memories from the night before came rushing into my mind’s vision. A scene of people on Las Vegas Boulevard surrounding me, scurrying in madness–our rental car completely mangled–ambulances and arguments with a large nurse–needles in my arm and a concerned woman–an officer maybe? Panic came thumping and parading into my chest. Panic. Fear.

When I was arrested, no shirt was on my back adding yet another white trash display to my police record. The police officer, a shorter built woman with stern shoulders and kind eyes, grabbed the first shirt she could find in the car before they took me to a hospital.

Looking around me now, it was not hard to see where I was. Looking down presented even more of a grim reality. The shirt the officer had grabbed for me was a tie-dye shirt that Adam Crew had given to me years ago. On it, there was a cartoon setting of Charles Manson with a machete, Santa Clause’s head in hand, and a swastika on his head. In big black letters, it said, “MERRY FUCKING CHRISTMAS FROM METAL.” This shirt had something to do with Fred Gall and someone named Lou. That brought a smile to my lips, but the fact of maybe having to appear in front of a judge in this offensive shirt did not sit well. For about four hours, I silently convulsed. No one was telling me shit and I could only get out of my chair if I raised my hand once an hour. A couple of times I laid down, only to be rudely awakened by a baton tapping my head and a voice saying, “Get the fuck up unless you want to be detained.” The only thing that weighed on my mind was Camila. What happened to Camila? For hours I sat in the dwelling state, wondering “what ifs” and uselessly iterating “I should haves” to myself. At that moment, I could have been in route with home on the horizon, and the love of my life next to me; with that intoxicating smile she had. Instead, I was in the Clark County Detention Center, and there was no telling how this could end up.

Eventually, I talked to my pops. He had spoken with Camila. Said she was really worried about me and even tried to visit me. Finally, she gave up and went to the airport where she bought a ticket back to Austin. Now I KNEW holding her in my arms would surely not happen again. That was it, I blew it. That was our last trip together before she had to go back to Brazil. My heart almost imploded with grief. Finally, I curled up inside my Lou Metal shirt like a turtle, fought my sluggish body to stay upright, took some deep breaths, and fell back asleep.

Another sixteen hours were spent in that cold hell-of-a-waiting room. Supposedly, some drunken gibberish that flew rampant out of my mouth the night before gave the correctional officers reason to believe that I was a potential 51/50. For almost two days, I ate, slept, and watched the History channel in that ruthless chair. Finally, they got me processed and it was time to go to a cell block.

Once you start moving through the booking process, you will notice that morale goes up between you and the lucky inmates who have just been selected to go to a cell block. When you get called to go upstairs, or somewhere else, you feel like you have been chosen, knowing that the horrible waiting room is behind you and a bed awaits. The worst part about jail isn’t even the jail aspect, it’s the fucking booking process. The waiting room of justice.

They brought us to another dungeon room for about two hours. Everyone I was in there with said we would be in there for at least nine hours. It was nothing new to them; this had been protocol for their in-and-out of jail lifestyle. Then, like a prophecy, I was called with two other dudes in the small cell. It was time to go to our beds. Disappointment toiled the remaining fellows as they’re faces sunk and we pranced out like self-proclaimed messiahs.

In a moldy bathroom, I was told to strip, grab my balls, bend over, and cough. Then I was given the yellow garments which Clark County represents.

What did I say? I kept questioning myself this over and over when they brought me to the medic block; a place for the sick, the injured, and the crazy. I wasn’t sick or injured, that was for sure!

Old men and mangled people were my new neighbors. I unfolded my bundle containing a mattress and blankets and began making myself at home, continuing to therapeutically organize my area.

By the time I got out of the shower, a Nurse Ratched voice called my name over the shorting intercom. The main C.O. pointed me to where I was being summoned. Curiously, I followed the designated direction and ended up in a little office.

“Here,” the nice woman said handing me a tiny, paper cup. “These are your meds. Knight, right?”

“Anti-anxiety pills. Do you know what those are?”

“Exactly, this is a weaker Xanax.”

My lights shut off the moment my face touched the pillow. It could be a while before I’d be out and this brought a horrible trepidation, but I calmed myself and accepted what cards I had mindlessly dealt myself. I was trapped in this dump, and fighting it was just going to make it worst. It felt like poison oak was covering my life.