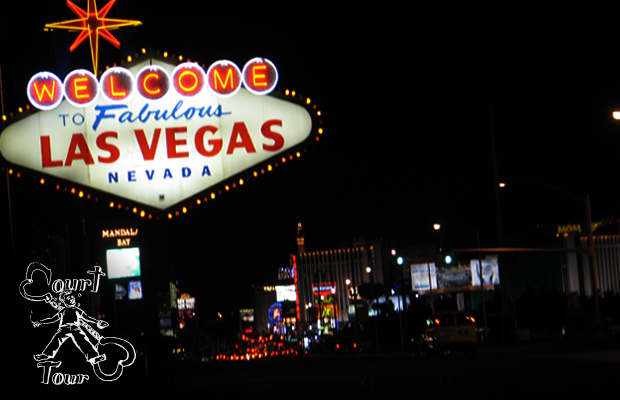 Pounding. Someone was pounding on our door. A voice accompanied the up-roaring door.

“It was check-out time at eleven!” The voice was just a bit quieter than the thundering knocks but nowhere near quieter than the thunder in my head. “It is 4 o’clock PM! IT IS TIME TO LEAVE!” Once the time registered in my head, I shot up, creaking my neck as I did so. The shower was running and as my pants found my legs, it shut off. Camila came out looking just as burnt as I was. What the fuck happened? Why would we take Xanax at five in the morning? Wait, did we take Xanax? There was no time for answers, let alone more questions. It was time to get the hell out of there.

The coffee at Denny’s smelled amazing. Camila sat across from me with sorrow drooping her lips.

“This sucks, I didn’t get to see anything. I can’t even see the Grand Canyon unless we leave right now. I didn’t get to see anything in Las Vegas. What will I tell my bosses when they ask me what I did? Not only that, I will go back to Brazil in maybe February, March for sure! I didn’t see…” She paused in sadness. I had an idea to fix all of this. It was a long shot and, soon to be known, a horrible idea.

Now the plan had shrunk immensely, with distance heavily outweighing time. The plan was to party until 11 p.m. or so, in Las Vegas, then wake up at 4 a.m., drive the 5-hours to the North Rim, spend a few hours there and drive the straight 11-hours back to San Jose. Arrival time would be around 5 or 6 a.m., so a quick nap would take place, and then returning the rental car to SFO at the drop-off time of 1:00 p.m. would follow. It was definitely hectic but do-able. It was 9 p.m. and the two of us found ourselves walking down Las Vegas Boulevard. Some drunk asshole in a Chubakka costume came in hot with harassment on his mind. Or hers. Fuck, I couldn’t tell. It was a Wookie! The derelict got Camila in a bear hug for a second, but she escaped and we slipped away. I’m damn sure the fiend copped a feel.

The Bellagio Hotel sprouted geysers in the air. A huge glass air balloon towered next to the Eiffel Tower. Lights were everywhere. Never had I seen Las Vegas, it was interesting. Like one giant circus with the people as the acts.

After dancing to music that both Camila and I despised at some club offering free drinks for women–thus, our attendance–we decided that it was time to get back to the hotel. It was already almost 1 a.m. and, following the plan we had crafted, we would need to leave in no more than four hours.

We were in our room for maybe 10-minutes before we left again to a little run down Casino next door. Drinks flowed, cheap whiskey mostly, and I found myself at a Black Jack table…winning.

“Come on, Travis. Let’s go back to the hotel. It is late,” said Camila with a tug at my shoulder. I was in the zone, and I was up a hundred dollars.

“Hold on, baby. Let me just play until I lose,” I said with eyes glued on the dealer’s wedding ring. “Is that cool?” Silence. Vacant was the floor behind me where she once stood only seconds before. I sucked down my beer and made another bet.

Two hands went by and I lost. I thought nit wise to walk away while I was still $80 up. My phone came out of my pocket and queasily waved by the time 2 a.m. My eyes started scaling the smokey casino for Camila, but she was nowhere to be found.

Camila and I had been conversing with some security guards that night, so I asked them if they had seen her.

“She left,” said the shorter one. “She looked pissed, buddy.” Before he could say another word, I was out the door.

Camila was back at the hotel, pretty drunk, and super pissed. I couldn’t blame her. Our agreement was to stay out only until 11 p.m.–midnight at the latest. Already had we breached that idea by staying out ’til 4 a.m. Then when she asked me to go back with her, I had said something stupid about winning at Black Jack when really I had been winning at “Black Out.” My heart coincided with hers, and I just wanted to make it better. Too late. She was irate. Without a word and fire in eyes, she stormed out of the hotel. Leaving the entire room trembling in the wake of a slammed door.

She just needs some time, I told myself. Another 10-minutes went by and worry shattered my whole state. Here was this gorgeous woman in a one-piece mini skirt, from a different country, drunk and angry walking around by herself on a sketchy side street that slithers next to the Strip. I had to do something.

“There’s gonna be some stuff you gonna see, that’s gonna make it hard to smile in the future. But whatever you see, through all the rain and pain…” Tupac and Scarface’s, “Smile” was blasting as I recklessly drove down a dark side-street; vehement hopes that she had even gone down the fucking street in the first place. I left my shoes, socks, and shirt at the hotel, so I was definitely lookin’ white trash. Ignoring this reality, I swallowed my beer, trying to calm my worry as I shot down the unknown street. By this time, I was freaking out. She was nowhere to be found, and now I was lost. In a panic, and on the verge of a nervous collapse of some sort, I drifted the car into a right turn. Then right again, this time screeching a bit during the turn, onto the Strip. “Smiiiiiiiiiiile for me. Won’t you just smi…” SMASH!