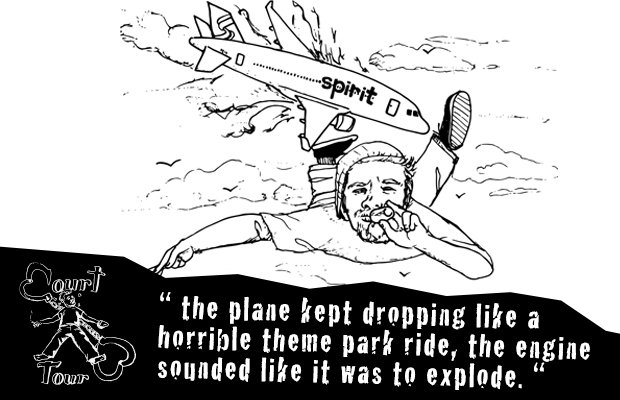 There was still money in my account, due to successful gambling from the night I was arrested. The first thing I did upon release was bought a pack of smokes. How depressing. Then I hailed the first cab I saw, got in, and asked him to take me to the Motel 8 where my bags were hopefully still being held.

The friendly desk clerk gave me my bags and I was ecstatic. The cab driver patiently waited outside for me as I continuously thanked the middle-aged, dark-haired woman for holding on to my belongings.

“Where to, sir?” Asked the cab driver.

“The airport, I need to get to the airport and get the fuck out of here.” The man laughed as his eyes found my “compliments of Clark County Detention Center” brown goody bag.

“Ah,” he said with his thick, West African accent, “I see Las Vegas has treated you well.” This time, we both laughed.

“Well,” I coughed and caught my breath, “what happened to me in Vegas won’t be staying here.”

Just let me leave this hell hole! Already I had been to Southwest, Delta, American Airlines, and none of them had any flights that matched my current budget. The bored woman at US airways monotonously told me to try Spirit Airlines. Spirit Airlines?

Spirit matched my budget. The one-way flight to Oakland was a mere $75.00. It was now six p.m. and my flight wouldn’t depart until 11 a.m. the next morning.

“Please! Just let me leave this place!” I pleaded aloud to the sky. A passer-by witnessed this and chuckled, then froze when I gave him the glare that better says “watch it, buddy”. His nervous look scanned over the “Merry Fucking Christmas from Metal” shirt that now stuck to my back with grime, and he scurried away like a wet cat.

Now, the waiting game was upon me, a game I loathe more than most things. Still, 12 hours remained before I would even be getting on a flight. To fight the increasing rate of restlessness that was bubbling inside my bones, I picked up my bags, asked a traffic cop where the nearest gas station was, and began walking the two miles to the closest place where a cold beer could be bought.

A tall Canadian man named Rich who was down on his luck crossed my path at McCarren International around 11 p.m. Camila and I had spoken for a couple of hours before I met Rich, and cleared the air. She was so understanding and obviously also very upset, but forgiving. Perfect balance, I had found myself thinking. You don’t come across that very often. Rich offered to pay for a cab so we could go back to the store in order to obtain more beer. He felt obligated after I shared with him that I had just returned from a two-mile hike for but a single brew.

Rich bought an eighteen pack and he shared his story with me–and what a bummer that was. An older woman, possibly a prostitute, joined us on the bench inside; tucked away behind a post to stay hidden from the check-in counters. She started sucking down beers and feeding Rich and I pills. More Xanax. I’ve always avoided Xanax for the most part of my life, but Xanax was surely the motif on this trip.

It was 6 a.m. when Rich and I parted ways, but the raspy-voiced woman leeched onto me. She just crossed the gate into the terminals right behind me. With no intention of getting on a plane, she told me HER story–something about living in Vegas for 20-years and a lot of rough livin’. I had been smashed drunk since midnight, and the Xanax intensified my delirium. All the woman’s life stories were overflowing in my mind and had long flooded away before my brain had a chance to absorb them.

For the remaining time at my gate, I got drunk and played slots, winning a hundred dollars at one point. The old ashtray-lady really tried to grip onto me after that. Luckily, I lost it all in a flash and she mingled off somewhere. That was the only time in my life when I was actually happy that I lost money.

Finally, I boarded my plane. Finally, I was going home.

The flight was terrifying. I felt that every passing second could easily mark my last. Turbulence was quaking, the plane kept dropping like a horrible theme park ride, and the engine sounded like it was going to explode. Norman Greenbaum’s one-hit wonder, “Spirit in the Sky” melodically spun in my head as the reality of becoming one taunted my thoughts. To stay about my wits, I sucked down $7 mini bottles of wine and $8 Jack Daniels shooters. By the time I got off the plane, kissing the stale airport carpet with thanks when I did, my wits were long gone.

This had been quite a trip. I was just trying to look at all the positive things over the low points of the trip as I entered San Francisco from Oakland on Bart. Now, I would have to go back to Las Vegas. Fuck. Also, there was another court hearing I had to attend in Texas in the next month or so for tomfoolery that had happened some months back.

Like the moon and sun dance during an eclipse, court dates were starting to align, and a Court Tour was brewing. It wasn’t quite there yet, but have faith my friends; my stupidity would complete the cycle in the forthcoming events. The eclipse would become, and The Court Tour 2015 would live.