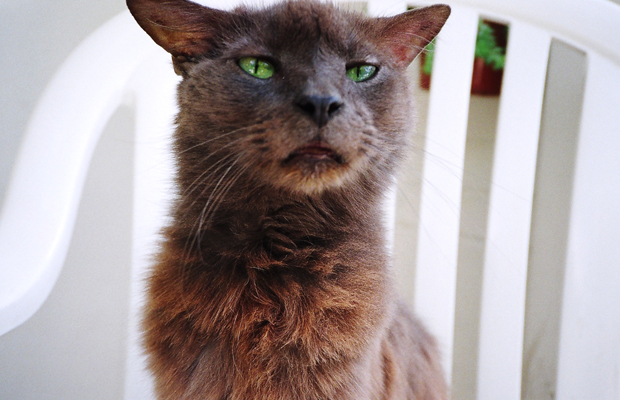 From the Toeblock to My Block, the Lore of Earl Lives On.

The story of Earl is one so eerily remarkable, that sometimes I find it hard to believe myself. Archaic perspectives reflected happenings of this sort, in long-ago tales of Elders visiting the jejune; emerging from a thin line that separates the obvious from the unseen and settling into the land of lore. Maybe it is my mind that has coaxed reality to shape itself in the likeliness of wonder… no one will ever know, not even me. However, my instincts stay thick and unchangeable, like a stubborn ego. This story has followed me around like a shadow for years. It is one I have babbled of before, and will babble of again–here, perhaps for the last time; unless, that is, Earl happens to return.

The first time I met old Earl, he came in the form of a rickety cat—one that roamed the tropic alleys of South Beach, Miami. After being kicked out of his own home for pissing all over the house, Earl had decided to seek shelter in the Toeblock IN Miami; probably because he was either embraced by dirty derelicts like myself or because he could dodge detection due to all of the blacking out that was going on.

“…or because he was able to dodge detection due to all of the blacking out that was going on.”

His manners were not capricious, as the old cat would consistently settle himself at my feet, and relentlessly nag my attention with a series of dilapidated grunts, and attempted meows. I would pay my respect by running my fingers through his matted hair, soothing the old bones that his deteriorating skin sheathed.

However, the haggard cat was not so popular with other tenants of the  Miami Toeblock; specifically Matt Kehoe. Earl used to immensely bother Kehoe, for the cat’s grungy demeanor clashed worlds with Kehoe’s meticulous cleanliness. Every time Kehoe fell asleep, old Earl would hobble into the small beach apartment–usually with the help of my turned eye–and immediately, like a magnet with a mind, would find where Kehoe was snoring. With a small grunt and a few attempts, Earl would make himself a comfy bed out of Kehoe.

While Kehoe dreamed of large breasted women and his life as a rap star, the cat he so much loathed dreamed directly atop him; about fish dinners, milk, and perhaps death. Usually, this scenario would end with Kehoe waking up, only to notice the old cat snoring away. Fuming with short-stack aggression upon finding Earl clamped to his back, Kehoe would grab Earl by his scruff, and toss him out of the house; all the while cursing my name and my judgment for allowing the matted cat into the Toeblock. Earl remained for the remaining entirety of that Toebock House. When I finally left that Southern Beach, Earl followed my heart, and the spirit of the Earl followed my feet; yearning for the respect often yearned for from an endangered soul. The second encounter I had with Earl was less intimate. It happened 3 years later, on the opposite coast, in a much colder, foggier community. I was smoking a cigarette, attempting to distract a crouching emotional dysfunction, on a 6 x 4 porch, also a second-story patio. A clicking startled my daze, and over the horizon of the porch’s top step, a haggard, beaten, yet familiar, face rose like a hesitant sun. The face belonged to a battered raccoon–the most torn-up raccoon my eyes had ever met. At first, I was frozen with trepidation, fearing that the beast would attack me at any moment. There was a stand-off between the raccoon and me, and it ended when the old beast grunted a familiar noise; it was Earl.

We held one another’s gazes for an instant, and in that speck of time, I felt all the pain of the broken traveler in front of me. I saluted old Earl with respect, all the way until he hobbled onto a neighboring house, and creaked off into the hazy night.

A few weeks ago, my wife and I were caught off guard by a large shadow swiftly sweeping by our front door. The culprit climbed up into a tree, directly on the other side OF our backyard’s fence. An obtrusive spotlight resides on the neighboring unit’s roof, and it rudely blasts into our backyard all night, confusing my plants, and immeasurably pissing me off. The light, also, illuminates the tree, and like a prison break gone bad, the culprit was caught in the flaring beam, hypnotized by the sheer ridiculousness of this light. It was a possum. I thought nothing about the scavenger… until a week or so later.

I was enjoying the calm that comes before any storm, and I heard this crunching noise. I wearily peeked over my fence to investigate, and saw the same possum that lives in our tree. He was large, beat-up, lost, and crunching away on only-The-Creator-knows. I noticed a huge bald spot on his back as he locked his senile eyes onto mine, and swiftly I realized: I knew those eyes. They were the eyes of the beaten and forgotten, of the rambling and wise, of the endangered spirit. I’d know that haggard glare anywhere: it was Earl.

It has been nearly a decade since the old spirit latched onto me, back in that distant time of the Toeblock IN Miami. To keep the lore pumping strong, I left some leftover potatoes at the base of the possum’s tree; a few nuggets of respect for the old tired spirit of Earl.