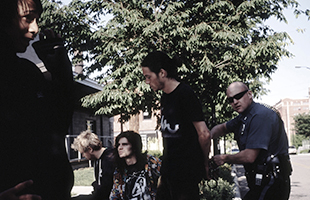 American Folklore encompasses many broad categories. It is comprised of jokes, riddles, myths, legends, cautionary tales, and many other forms of storytelling. The founding of Toebock is often surrounded by legends and tall tales. Many stories have developed since the founding long ago to become a part of INdustries folklore and underground awareness. INdustries folklore especially includes any narrative which has contributed in shaping the values and belief systems of regional members. These narratives of which I speak may be true and may be false; the veracity of the stories is not a determining factor. The following is a tale of folk heroes. These individuals have become important figures in Toebock INdustries history, or chroniclers and creators of such folklore.

This morning while leaving our local Starbucks on 39th and Genessee, the screeching brakes of a car coming to a quick stop attracted all of our attention. As we glanced over to see what was transpiring, an overweight black woman with a cigarette loosely dangling from her lips, and a carton resting on her dashboard shouted in a raspy country tone, “Hey you punk ass nigga, fuck you!” The 40-something black male strolling down the sidewalk that this comment was directed at condescendingly replied, “Fuck you, bitch!” A valid response. The woman then peeled off in her blown out, rusty, or just possibly a shitty maroon, early 90′s Chrysler LeBaron. We shared a laugh, not quite understanding exactly what led to this interaction, and continued on our way to the car.

A loitering crackhead, who had been staring at us with hopes of potential profitability, or just a free beer, criddled up to us and asked, “Whatchu all doin’?”

“We doin’ this!” A. Crew exclaimed as we piled six deep into the five-seater 1997 Toyota Camry and headed off to start our day.

The sun was shining and hopes were high, as were we. It was time to stack! Kansas City’s favorite son, Sean Malto, had warned us that our decided upon first-spot-of-the-day could be “hit or miss.” Of course, as skateboarders, we are used to this. You never know how long you will be able to skate any particular spot before security comes, a random citizen decides to become a hero, or the cops get called. This is to be expected.

Most of us began warming up by playing games of S.K.A.T.E. in the street next to the spot. While Julian a.k.a. the “Legend” was trying a trick, he ran over something and was pitched off of his board. After getting up from a punishing roll he saw that it wasn’t a rock that led to his board abruptly coming to a stop, it was a bullet. This should have been an early warning sign to all of us. Things were about to get buck.

Moments later, a carload of men in yellow jackets rolled up, jumped out, and started attacking us. I don’t know if they had just burnt a sherm blunt or something, but these motherfuckers behavior was more than irrational. After detaining most of the group, one of the men tackled J-Lo while he was walking to his car. After that, three of them took Adam down. The rest of us sat and watched in handcuffs. Fucking handcuffs. These security guards had lost their damn minds. The drug-faced assholes called the police and we were all forced to wait for their arrival. After a couple of minutes, two cops rolled up. Surprisingly, in comparison to the jacked-up security guards, they were somewhat reasonable and sympathetic to our cause. However, when the chief showed up, he was pissed. The other two cops had warned us not to laugh at their superior officer when he arrived. We now realized why. This guy looked just like Sean Penn, a fucking doppleganger. It was so hard to contain our laughter. The chief basically told us that if we fucked with his car, he would kick our ass, cop or no cop. Understandable, right? Why the fuck would we do that anyway? We were just trying to skate a spot. Okay, whatever, and we’re out. What in the fuck was that? After this, we decided to head across state lines to Kansas City, Kansas. We figured that this would put some space in between ourselves and the law.

We decided to hit up the Waverly rail. Within moments of entering the parking lot, we were greeted by three neighborhood-rats, one of which had his eyelids flipped up, looking all weird as shit. These kids were cool, though. They just wanted to watch us skate. We began to session the rail, well Perdue did. The rest of us were still too burnt from the previous night’s debauchery, or sidelined with fucking back problems. While Steve attempted to film a line at the school, Ben Erickson, the T.M.G. H.D. frontman, was out in the street getting a second angle of Steve’s trick on the rail. Seconds after Ben had gotten his camera settings dialed in, the roar of a speeding vehicle caught all of us by surprise. “Sker-dooooooosh.” A late-model box Chevy or a damn Lumina, or something, blew through the stop sign at the bottom of the hill and pretty much bounced it’s frame on the ground going about eighty miles per hour. A police car crested just over the top of the hill, sirens blaring, behind the fleeing suspect. This fool was in a high speed chase. What in the fuck is going on out here? The car raced past the spot, nearly hitting our designated camera pointer, with an officer in hot pursuit. “Holy shit,” we thought. Ben was a bit shaken from his close encounter and pretty much just played duck, duck goose with the local kids, big-brother-style for the rest of the time we were there. Steve skated for a bit longer after the incident, but then decided it wasn’t going down, so we dipped.

We went to a couple more spots that day, filmed a few things and then returned to the Toeblock. Everyone made food, hit up the local liquor store, and began to prep for a trip to Buzzard Beach, Westport’s watering hole and our portal to the darkside.

After burning a blunt in the Red Room with Adam, Chris Baldwin and I ventured out to the porch to smoke cancer sticks. “Hey Buck…Buck,” shouted a tweeker from the building next to us. He was referring to the name on the back of the Royals jersey Baldwin had on. “I’m coming over there, Buck. Y’all got that good, green weed?” We tried unsuccessfully to ignore this wasted retard. The man climbed onto his neighbor’s balcony and then tried to climb over to ours, which was literally an entire alley apart. Before this idiot was able to fall to his death while continuing to yell “I’m coming over there, Buck,” his pissed-off boyfriend pulled him back, only to domestically batter him. Shit just keeps getting crazier. We went back inside the house and rounded up the troops. On that note, it was time to go to the bar. We were warmly welcomed by a familiar group of K.C. homies upon our arrival at Buzzard Beach. Many a drink was had as we reminisced on the strange occurrences of the day. As 2:30 a.m. quickly approached, Adam’s attention was drawn to a tall, big-tittied, scantily clad, black girl bending over the bar. Thirty minutes later, as the crowd was pushed outside, “Da Illa” drunkenly approached this young lady, who was accompanied by two fugly cohorts. After a brief, come-back-to-the-house type conversation, the attractive, inebriated skeezer jumped onto Adam’s back screaming, “I wanna fuck a white boy tonight! Right in the ass!” Wow. Adam ran across the street with the chick still mounted to his spine. Here we go. Before I knew it, this chick hopped off, pulled her pants down, copped a squat, and started pissing all over the parking lot across the street from Buzzard Beach. We watched in amazement as a stream of urine shot at least five feet in front of her. I struggled to get a fucking photo, but she quickly stood up, leaned against a car, and started doing a bottomless booty clap at me, possibly in hopes of shaking off any remaining piss. Sadly my attempted Instagram ended up blurry as shit. Daaaamnit. Again, Adam tried in vain to talk this girl back to the crib. Unfortunately for him, she was captain-save-a-hoed by her Jugga-slut white girl homie. No love. Back to the Red Room. Earlier in the night, Travadaddy and Julian had mysteriously disappeared from the Buzzard about an hour before the rest of us. They had been putting in work on our neighbor, whom we had affectionately deemed Oral Laurel. Moments after we got back to the house, Travis came in, weirdsted as shit, screaming about how he needed shampoo. Where was Julian? Time to investigate. After Trav had stolen Ben’s shampoo and scurried back over to Oral’s, a few of us crept next door as well. We found Julian. He and Travis were laying on Laurel’s bed while she sat in between looking as faded as the hood of Adam’s Camry. Who knows what the fuck these squids had just gotten into? I had personally seen enough. Before exiting Laurel’s crib, I spotted a big ass bag of M&M’s sitting on top of the fridge. Unable to resist, I stole the shit out of it. Come up! Back to the Red Room with snacks! What the fuck y’all thank! One more tweest and we were ready for bed, only to do it all over again the next day.

The time had come. An INdustrial invasion was past due. This is the account of one day in the lives of INdustry “Illas”. There is more. That I know is true. I mean shit, we were in Kansas City for an entire month. You can only imagine the day to day encounters and events that I failed to mention. In my personal opinion, less is always more. The more that I tell you, the less I leave to the imagination. The more that you know, the less that you need to find out on your own. Explicit details are unimportant. We came, a few swallowed and we skated. We were out here! We get “out there”, and we definitely “blacked-out there”. We couldn’t have “done” it without the help of the great homies who showed us around, kicked it, and killed it. Thank you all so much. Kansas City stand up! We’s on to the next, the schmade must continue!